International Nurses Day, May 12 is a worldwide celebration of Nursing on the anniversary of Florence Nightingale’s birth.

In 2022, the theme for International Nurses Day is Nurses: A Voice to Lead – Invest in nursing and respect rights to secure global health. #IND2022 focuses on the need to invest in nursing and respect the rights of nurses in order to build resilient, high-quality health systems to meet the needs of individuals and communities now and into the future.

Here is my favorite photo of two precious family members who were my earliest mentors in the profession of Nursing. I am named after one of them. 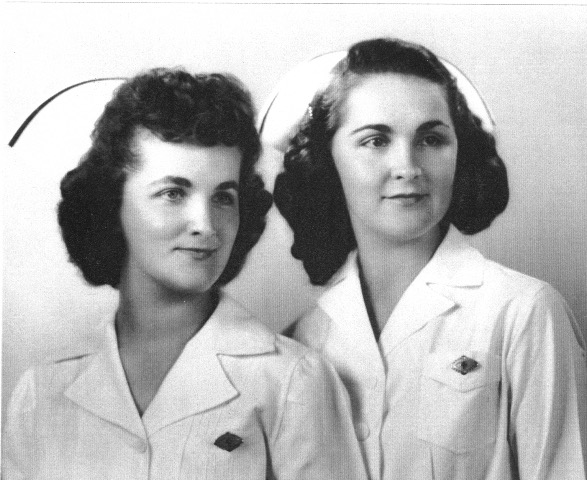 Violet Luchak Melenchuk, my mother, a Canadian, completed her Nursing diploma in 1949 at Portland Sanitarium and Hospital in Portland, Oregon, USA.  She was one of the first student nurses to be “allowed” to marry in 1948, a year before she graduated, because her husband, John Melenchuk (also a Canadian), began Optometry School at Northeastern Illinois University in Chicago in September 1948. They kept in touch through letters during their first year of marriage and only saw each other at Christmas. When my mother graduated from Portland Sanitarium and Hospital in the spring of 1949, she moved to Chicago to be with my father. She worked for several years at La Rabida Children’s Hospital, Chicago, Illinois while my father finished his Optometry degree.

My mother’s sister, Janice Luchak, shown in the first photo with my mother, also studied nursing at Portland Sanitarium and Hospital and graduated a year before my mother. She married Jack Hale, who was accepted to the School of Optometry at Northeastern Illinois University in Chicago and influenced my father to study there. Following my mother’s graduation from nursing school, these two newly married couples spent their early years of marriage working and going to school in Chicago.

There is serendipitous synchrony to this story.  I am named after my Aunt Janice, and my nursing career has followed in her footsteps.

My Aunt Janice earned a Bachelor’s and Master’s degrees in Nursing and served as a faculty member at the School of Nursing, Walla Walla College campus in Portland. I chose Walla Walla College (now named Walla Walla University) to do my undergraduate nursing degree. In the early 1970s, I too lived and went to classes in the same Nurses Residence (located across the street from the original site of Portland Adventist Hospital shown in the photo of my mother above. My Aunt Janice was one of my teachers during my senior year of undergraduate nursing education at Walla Walla College, Portland campus. However, she was, first and foremost, my special Aunt and I am proud to be her namesake. She generously included me in her family and nurtured me with many home-cooked meals and picnics and hikes on weekends at Multnomah Falls and the surrounding area. My nursing career was even fashioned after hers. Following my undergraduate degree in Nursing from Walla Walla College, I went to Loma Linda University to complete a Master’s degree in Mental Health Nursing and was fortunate, at age 23, to be hired by the University of Calgary where I served as a member of the Faculty of Nursing for 33 years (and, along the way, and completed a Ph.D. in Counselling Psychology).

Coincidentally, but perhaps not, my area of nursing scholarship is focused on advancing knowledge in Family Nursing which recognizes that family relationships and family functioning are central to the experience of health, illness, and healing.  I am standing on the shoulders of giants—my precious mother and aunt were my earliest role models in Nursing.

And the circle of influence and serendipity continues with my daughter, Ashley, whose birthday is May 12—International Nurses Day! Ashley earned her undergraduate nursing degree from Loma Linda University in 2011 and is enjoying her nursing career.

May 12 is a yearly international celebration of the unique and sacred work of nurses. My family history has embodied this sentiment across three generations.